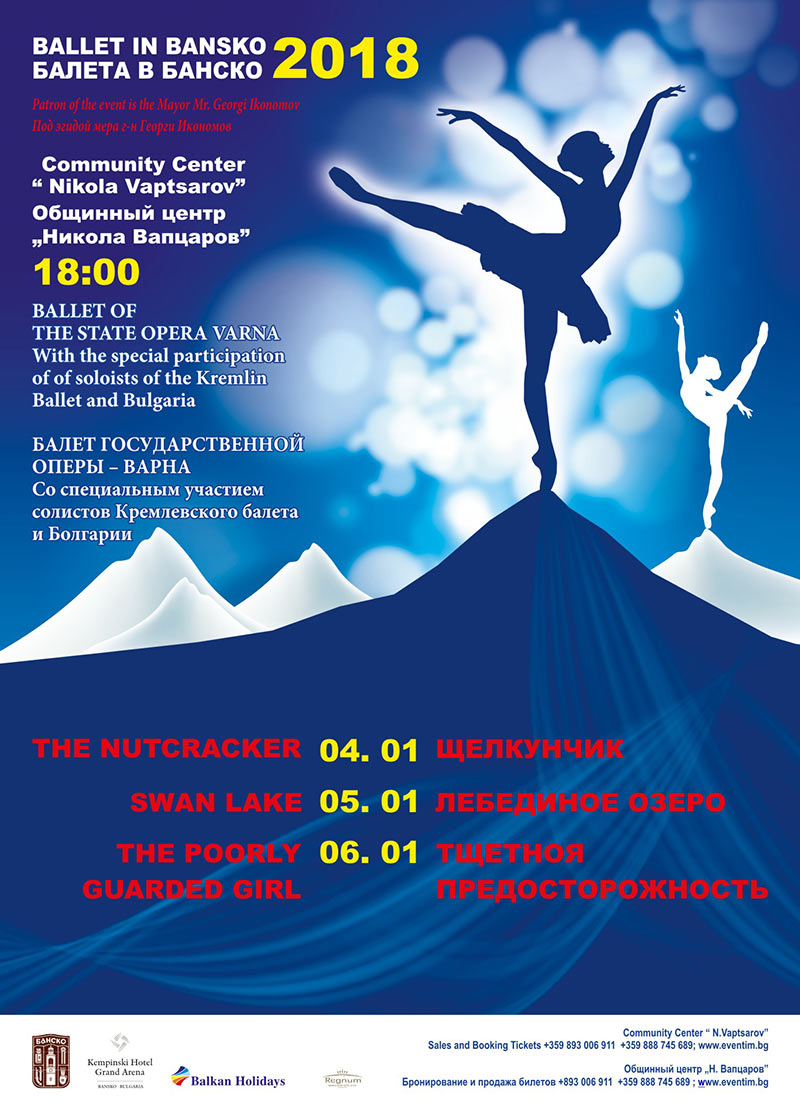 For a fourth year in a row the citizens and guests of the large ski center will be able to combine the emotions of the winter sports with the gracefulness of the classical dance. From 4 to 6 January, every evening at 18.00, on the stage of “Nikola Y. Vaptsarov” Community Center the ballet troupe of the Varna Opera together with guest-soloists of the Kremlin Ballet in Moscow will present hallmark examples of the dance art.

THE NUTCRACKER by Pyotr Ilych Tchaikovsky is a fairy-tale ballet in two acts after the story “The Nutcracker and the Mouse King” by Ernst Theodor Amadeus Hoffmann. The plot tells of little Marie who is dreaming of a real Christmas gift, but instead she gets a nutcracker in the form of a soldier in a beautiful uniform. Still, the dream comes true – the dream takes Marie to a magic kingdom where she dances in the arms of her Nutcracker Prince. She experiences wonderful adventures, meeting a king and a queen, mice and a whole army of lead soldiers. Her dolls show fascinating dances from Spain, China, Russia, France, and finally all spin around in a happy final waltz. PHOTO

THE POORLY GUARDED GIRL by Ludwig Hertel is one of the first classical ballet works. It will be presented in a new choreographic edition by the soloist of the Bolshoy Theater Sergei Antonov.   The premiere of the work was in the remote 1789 in Bordeaux, France, and since then it has been one of the most preferred titles.  The plot tells of the love between Lise and Colas which is threatened by the mean intentions of the mother of the girl – Marcelina, who wants to arrange a marriage of convenience for her. Slowly and imperceptibly the feelings between the two young people get strengthened and overcome the dishonest plan of the mother, who turns out to be forced to give her blessing. In his version Sergei Antonov adds new personages: the Gypsy woman who tells the fortune to Lise and Colas, predicting them the future wedding, and Marcelina, Lise’s mother. The ballet is developed on the basis of the classical dance, but it contains lots of comic and play-like situations, which makes it attractive to wide audiences of all ages. photo

SWAN LAKE with the genius music by P. I. Tchaikovsky is the most significant ballet work in the world, a symbol of the classical ballet. At the basis of the plot is an old German legend about the beautiful princess Odette, turned into a swan by the evil magician Rothbart. The Varna production retains the classical interpretation of the ballet with its lyrical charm and liveliness, where music and dance are in harmony. PHOTO